RNC Turns the Screws on NYC

By Christian Roselund and Michael Carpio

As the city gears up for the Republican invasion, and the prospects for massive protests loom, the NYC 2004 Host Committee is scrambling to get ready.

The Brooklyn Admirals: Lacrosse in Brooklyn?

By Karen B. Song

One Saturday in Staten Island, Sondra wakes her thirteen-year old daughter up at the tender hour of 3:30 a.m. for a lacrosse tournament with her team, the Brooklyn Admirals. 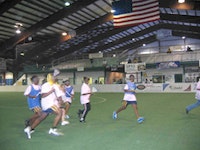 A seaside escape for city dwellers, Coney Island is one of Brooklyn’s most mythologized neighborhoods. Developed by robber barons and political bosses in the 1850s and 1860s, the main attractions were gambling, drinking, and dancing as cabarets, racetracks, and brothels flourished alongside amusement parks and luxury hotels.

Even while crammed into a booth in an 8th Avenue diner, Chris Wangro, between bites of his bagel and poached egg, gives good interview.