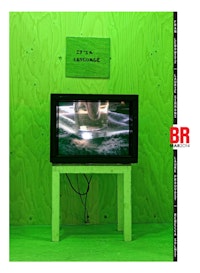 Sometimes several hours before dawn he ends up strolling along the sidewalk in front of his old bungalow.  Reaching the end of the block, he turns and strolls the other way.

A breath, and he veers, cuts across the front yard, along the side of the house, past the whirring air-conditioning unit in the bedroom window, up the pile of cinderblocks, over the slatted wooden fence.

Even the dogs have given in until morning.

He steps onto the deck and lifts the window with the broken catch and is blind-manning through the living room, the hallway, arms extended in front of him in case she has re-orchestrated the furniture again.  He doesn’t like the uncertainty.  He doesn’t like it yet somehow he does. It makes him feel like he can smell sleep and the lack of color in this house.

These days the bedroom is all off.  He barely recognizes it, which is everything has been redistributed, jumboed and quilted and fluffed in there like some nightmare rococo painting. The top of her dresser and side tables crowded with knickknacks, candles, antique perfume bottles, decorated eggs, miniature ceramic elves issuing from miniature ceramic huts.

Who wants to pass the night under such alarming conditions?

It gives him the impression he is snorkeling and someone reaches over and pinches off the top of his rubber tube.

It feels all right standing there, simply standing, except it feels even better wandering through the rest of the place, visiting the tiny office that used to be a girl’s room two doors down with the heavy desk and the laptop with amebic rainbow screensaver.  The tiny bathroom, which it feels even better stepping into and out of the clawfoot tub, running his fingertips along the spines of the books in the library upstairs that used to be somebody’s office. He bends forward, arches his neck delicately, touches his tongue to a faux leather binding, resumes his usual posture.

Performing ahistorical activities generates a sphere of silence around him, of what is the word salvation, no, cessation, a sphere of cessation around him, yes, sometimes in his socks, his sneakers neatly aligned inside the sliding doors, the buttery sensation of the floorboards beneath him, how he can slide across the living room in a slo-mo skate, elbows pumping, or sometimes lean back against the kitchen countertop, cool black granite against hot dry palms, staring into accruing luminescence, head blank as snow blindness, spooning up granola and yogurt and banana coins.

Once he was in the office that used to be the girl’s room, prying at the shaggy non-colored rug to confirm it was the original, when he heard the woman’s snore cut short.

A breath, and the sound of her throwing off the sheets.

A breath, and the disturbance of her rising.

Motionless by the desk, he saw her dark form drift past the doorway.  Heard her move down the hall into the kitchen where he had left his sneakers neatly aligned inside the sliding doors.

This unfolding thought: I can easily take her.

And this: I could sprint up behind her, knock her to the floor, sweep up my sneakers, become bad memory before she knew what hit her.

He could do that.  It would be weirdly easy.  He wouldn’t need to employ a utensil.  A vase.   A potted plant.  He could do that.  He is doing that.  That’s what he is doing.  He isn’t.  He didn’t.  What he did was stay put, stall to see what she would do next so he could determine what he should do next, and what she did next was remove something from the fridge, clank it back inside again, thunk shut the door.

The man remained motionless next to the desk until his lumbar vertebrae pounded. His knees began to lock.  It wasn’t interesting anymore and, halfway down the hallway himself, he heard her snore recommence.  He stopped to make sure.  It sounded like what is the word comfort, no, reprieve, it sounded like the word reprieve, that’s what it sounded like.

What he was doing was opening the cap on each plastic prescription bottle, tapping all but three or four pills from each into his palm, snicking the cap back on, replacing the bottle where he found it.

What he was doing was rearranging.  Transposing toothpaste tube and mouthwash bottle, face cream jar and deodorant stick, tweezers and scissors, nail filer and floss dispenser.

Before he misplaced the Pepto-Bismol, he unscrewed the top and took two chalky wintergreen swigs.

He wanted her to know what it felt like, he would have said had someone asked.

Had someone asked, he would have said he wanted her to experience the same thing he did, more or less, roughly speaking, if only for a minute.

LANCE OLSEN is author of more than 20 books of and about innovative writing, including the novels Theories of Forgetting, from which this passage is an excerpt), Calendar of Regrets, and Nietzsche’s Kisses. He teaches experimental narrative theory and practice at the University of Utah.