Letter to My Neighbor Who Took Part in the Colonial War

On April 25, 1974, a part of the Portuguese army put an end to an old and fragile authoritarian regime with a fascist ideology that had governed the little country in southwest Europe since 1926. 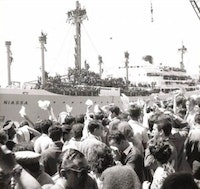 On Being a Good Ally: The Handmaid's Tale And the Specter of Fascism

Virtually every critical review of the new adaptation of The Handmaid’s Tale has drawn parallels between the series’ fictional totalitarian theocracy, Gilead, and the policies and ideological proclivities of Donald Trump’s administration.

Reading the May 2017 issue of the Brooklyn Rail, I was surprised to find an article arguing that the New Deal “lives on” in New York City.

Nicholas Gamso has taken me to task for a paean I wrote to the way the New Deal transformed New York City for the better in the midst of the Great Depression. He questions the public-spiritedness of much of what was done to New York in the 1930s under Robert Moses and Fiorello La Guardia, the lack of democratic input and racial inclusion, and the way the modernization of New York was also its undoing.