For the Whitney, it seems that the newness of Mauss’s perspective as a visual artist looking at ballet’s resonances is one that offers rich potential to create a new artistic form. Particularly, Mauss set out to examine the relationship between modernist ballet and the New York avant-garde visual art world in the 1930s – ’50s. 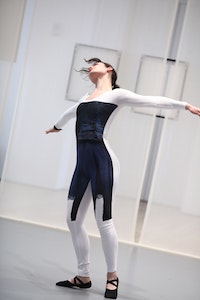 In NO BOUNDARIES: Dancing the Visions of Contemporary Black Choreographers, Gesel Mason is, as she puts it, “a body of research.” Since 2004, she has been learning and performing solos from some of the most exciting choreographers of the past few decades, all of them African American: Kyle Abraham, Robert Battle, Rennie Harris, Dianne McIntyre, Donald McKayle, Bebe Miller, David Roussève, Andrea E. Woods Valdez, Reggie Wilson, Jawole Willa Jo Zollar. Mason can’t dance each piece in a single evening, though the six or seven she takes on at a time constitute a heroic feat, and she always closes with her own solo, No Less Black. In between the dances, she screens footage from her interviews with choreographers. They all talk to her, but you get the impression that there’s a much vaster conversation going on, with sentences and gestures from different pieces inflecting one another, questions begetting questions.

Monk presents Cellular Songs as the latest in a series of performances that explore humans’ collective relationship with their environment. Her 2014 evening-length work On Behalf of Nature is a meditation on ecology. And as far back as 1994, Monk was examining how humans navigate their surroundings; in her site-specific work American Archaeology, performers directly communed with nature—seventy of them gathered at the Roosevelt Island Lighthouse Park and Renwick Ruin.

Image to Body, and Back Again

Classically trained in dance, Pirici expanded her work to experimental and site-specific practices in the styles of Tino Sehgal and Jérôme Bel over the last several years in Europe. She’s garnered attention in the European art world and only this past fall confronted New York audiences with her piece Threshold: a chain of performers in a human barrier—or portal—at the gate that separates the eastern and western Rail Yards on the Highline. Co-natural traces its roots back to other earlier projects—If You Don’t Want Us, We Want You and Leaking Territories, among others—in which performers stand on site and embody the poses of historical monuments, challenging their static authority.

Reflections on Reggie Wilson’s Danspace Platform: in Conversation with Drawings
and Text

By Gyun Hur and Helly Minarti

As a continuation of a drawing and text series produced during Gyun Hur’s time as writer-in-residence at Danspace Project Platform 2018, Gyun invited Helly Minarti, a visiting dance curator/scholar from Jakarta, to join her in performative writing on a Google doc as a response to a lively conversation she had with Helly at a café this month.