Escape from the Internet Swamp: ZACH BLAS with Iván Zgaib

Can we even imagine a world beyond the control of the internet?” Blas asks me as he takes a sip of coffee to wake up. And this vision of the universe of virtual networks also implies a question about cinema: if films can create audiovisual forms to bring different perspectives on the world, what are the possibilities they open to imagine the unimaginable? 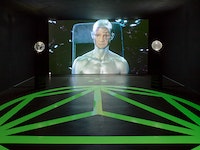 Having Some Space: Dissociation and Generative Embodiment in Basma Alsharif's Ouroboros

Perhaps it’s the protective, self-preservationist impulse extending from one racialized creative to another that prompts concerns of limitation with self-identification, but Alsharif’s modes of direction deftly precipitate the necessity of her insistence, and then collapse these concerns altogether as it becomes clear that her work speaks far beyond borders and barriers: from the vantage point of one particular socio-political locus, she excavates wider, apparently enduring truths of human relations and leaves us somewhere else altogether, making sense of the nebulous matter in between. It’s this cycling-through from mystification to elucidation and back which will characterize the experience of engaging with Alsharif’s newest work.

In the Field: Sharon Lockhart, James Benning, and People

In a conversation between filmmakers James Benning and and Sharon Lockhart after a screening of their films L. Cohen (2017) and Rudzienko (2014), Benning starts things off with a little joke. He sets it up. Two planets. The first planet says, “I have people,” and the second responds, “Don’t worry, that will pass.” The joke is over. The audience laughs. We can derive humor from the idea (the fact?) that the human race is a blight on any environment unfortunate enough to appear bountiful before us, but I suspect that Sharon Lockhart actually kind of likes people. 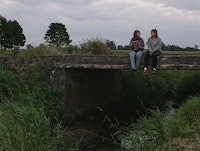 Even by the Berlinale’s patchy standards, this year’s Main Competition was an embarrassment, with Christian Petzold’s monumental Transit towering above a slipshod selection that otherwise ranged from forgettable to genuinely awful. Those critics who maintain that the festival’s best offerings are always found in Forum, the sidebar dedicated to more experimental fare (a loose categorization that starts just beyond the strictly narrative and stops short of the avant-garde), were certainly vindicated this time around. The program proved a goldmine, living up to its mission of showcasing new voices in international cinema and featuring several titles that would have more than merited a Competition slot.

High and Low: The Light and Shadows of Kazuo Miyagawa

Japan Society and the Museum of Modern Art have joined forces to present the bold claim that Kazuo Miyagawa was Japanese cinema’s greatest cinematographer.