IDFA 2019: Of Warriors Past and Present

At the International Documentary Film Festival of Amsterdam, a meeting point for film and market folk from all over the world, plethora is celebrated, diversity warranted and options encouraged. While the breadth of its program offers a maze into which one may easily find oneself lost in a state of indifference, I quickly arrived at the point where my actual work as a critical spectator began, the digging for gold.

Vitalina Varela is Pedro Costa’s seventh narrative feature in 30 years. Watching Costa, one has the impression of someone who has been away for a while reflecting at length upon his experiences, and who every few years dispatches a report about the things he’s seen. There’s an epochal sense at work: the hunch of arriving late, of getting older, and of taking stock once and for all. 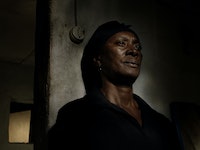 Angela Schanelec is a master of interiority, of portraying it and inspiring it—so much so that I find the experience of watching any one of her films more akin to the act of writing than to the intended escapism of most movies. More specifically, the experience recalls the act of writing in a journal; the hyper-presence of being alone, that unique compound comprised of perception, memory, and the acute awareness of one’s own corporality.

Waiting for Something to Happen

Angela Schanelec, the German auteur whose latest, I Was at Home, But…, opens this month at Film at Lincoln Center, preceded by a complete retrospective of her work to date (eight features, her mid-length graduation film and four shorts). Hers is a cinema of suggestion, of feelings delicately provoked, of connections inferred and, inevitably, misread.

Porumboiu’s newest film, The Whistlers, (2019) is a wonderful fusion of noir and poetic investigations into the way we communicate. While it tracks the story of a doublecrossing cop (also named Cristi) and several other parties in pursuit of a mattress full of money, it’s also a much deeper look at the way we apprehend signs and symbols, here via an indigenous whistling language from the Canary Islands. The film’s title refers to a group of thieves who are adopting the whistling language as a means of secret communication. As with his other films, The Whistlers is a work that is as enigmatic as it is entertaining. At the 2019 Toronto International Film Festival, where his newest film The Whistlers was having its North American Premiere, I got to sit down with Porumboiu and talk through some of this film and others, discussing, among other things, social roles his characters play, games, and the shape of this excellent new work.