Matt Evans's solo practice explores the meeting place of our digital and physical worlds by juxtaposing acoustic and electronic sound, and takes a wide swath of inspiration from visual art, poetry, and philosophy. Perhaps fittingly, we discussed his creative processes and inspirations by video.

Poet, musician, and translator, Louise Landes Levi was an original member of Daniel Moore’s fusion orchestra and experimental theater troupe the Floating Lotus Magic Opera Company in Berkeley, in the late 1960s, where she played alongside Angus MacLise and Terry Riley in outdoor productions that included Balinese gamelan, Tibetan ceremonial instruments, actors, puppets, and chant. Four decades later, Levi continues to practice this tradition in her own way.

Lontano (“As from a distance”)

Music making is a social activity, and that fundamental feature of touch at a distance is not just a physical realization of socializing, but likely something that motivated early humans to make this thing we now call music, a social desire for connection that brought about an enormous evolutionary step.

Even in conversation, ehh hahah—whose real name is Wojtek—is resistant to classification, preferring to define his work simply by what it is not. “I don’t like that ‘deconstructed club’ thing,” he miffs, not without reason. 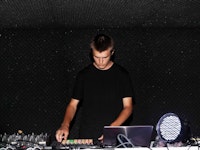 Sixty Sixth Congress is a fairly obscure bar on Greenpoint Avenue, and the gig happens in its rear room. Lunch held court just as much as performed, her lines as much poetry readings as rock’n’roll verses, her lolling demon tongue repeatedly sent out to taste the bad-droplet atmosphere. She was relaxed as she smoldered, spitting and mocking, drawling and growling