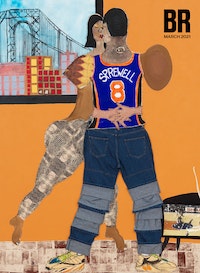 This month, we bring you two works that explore the isolating effects of grief. In her short story “To the Sea,” Sharon Adarlo uses magical realism to explore the way a tragic event can change us. The protagonist at the center is so consumed by her grief after the death of her child that she must endure a kind of supernatural growth to overcome it. Beatriz Bracher structures novels—Antonio is the second of her four novels to be translated into English and published by New Directions—around the peculiarities of narrative: uncertain recollections, overlooked characters, and crucial details hidden in plain sight. This novel’s central character, Benjamim, father to the titular Antonio, seeks the details of his own father’s life. But rather than follow Benjamim on the case, we're reading the fragments he collects. As readers, we’re substitute-detectives sorting through the accounts of three narrators and pinning our own red thread to the evidence.

by Beatriz Bracher, translated from the Portuguese by Adam Morris

Whenever anyone asked him how many siblings he had, Teo would say, “there are five of us, but one died.” If this confused whoever asked, Teo would only shake his head and say: “I never met him. He was the eldest and died when he was a baby.”

I don’t think you can really know a thing until you’ve gone through it. Before that, the thing only exists as an abstract thought that unfolds in theoretical space. And definitely not within you. But once the thing cuts into the realm of tangible objects and becomes your thing, then you must adapt, you must bend, or you will dissolve and be no more.