A tense suspense story about three soldiers hiding from scavenging locals and desperately searching for water in a forbidden cave, Do Not Hesitate (2021) is an unflinching film with a particularly dark twist that sends the film toward compelling and disturbing territory.

The Criterion Collection's release of Deep Cover (1992) emphasizes the impact of hip-hop and the Black film boom of 1991 and warrants a close examination of how race and identity configure in the film's searing, yet ambivalent aesthetics. Available on DVD and Blu-ray July 13. 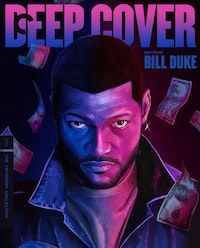 Swimming Out Till the Sea Turns Blue, the final installment of Jia Zhang-Ke's documentary trilogy focusing on Chinese artists, premiered at the 70th Berlinale in 2020. At the end of May 2021, it had its virtual release in theaters across the US. The third part of an over-a-decade-long series that began in 2006, the film consists of 18 thematic chapters focusing on the lives and histories of four different Chinese writers.