All Roads (And Genres) Lead To TIGUE

Instrumental music, when expertly crafted, often shimmers with something beneath its surface, a spring-loaded energy set for flight. Without words to act as release, the body turns to other solutions—dance, most notably, but in the case of Brooklyn-based band TIGUE, perhaps something more surreal.

The Hearth, Greer’s new theater company that she co-founded with Emma Miller is creating a fire for female artists to gather around. Or, more literally, “The Hearth tells the stories of women,” as the company’s website states. 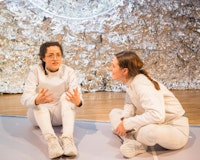 Sam Hunter’s plays are tightly constructed, hauntingly beautiful, and hold a striking alchemy of contradictions: his works are small, despite the vast lands on which they’re set, and they’re also poignant, despite—or perhaps because of—their lack of sentimentality.

In Their Changing Village, Two Artists Reflect on a Lost Hospital

Prior to rehearsing for Novenas for a Lost Hospital, cast member Ken Barnett saw his relationship to the titular medical center, St. Vincent’s, as twofold.

Trickling Up: The Theater Community Uplifts its Own

Theaters have been shuttered for a record number of days: with Broadway venues currently closed through at least June 7—and many Off-Broadway theaters following suit—we are quickly approaching our 100th day without communing together. It has had a devastating effect on the industry, and none have felt this seismic shift more acutely than its artists.

A Song for the Strivers in Evanston Salt Costs Climbing

Evanston Salt Costs Climbing, directed by Danya Taymor and produced by The New Group, is a song for the striving: a love letter to those who feel too much, who can’t help but give and give of themselves even if it comes at their own expense. Such characters exist throughout Arbery’s other plays, including the wounded Emily in Heroes of the Fourth Turning and saintly Isabel in Plano.

A Bonkers Workplace Comedy About Life and Grief in Events

If you’ve dreaded going back into the office, Events confirms the return may be worse than you imagined. Much, much worse.

Despite its Bumpy History, Merrily We Roll Along Glides Back to New York

The first time I saw Merrily was at Fair Lawn High School in New Jersey in 2008; Stephen Sondheim apparently attended a performance and spoke to the cast. I remember being amazed by the score, confused by the story, but moved by the ending—in that amateur production’s final gesture, as the chorus refrains “me and you” during “Our Time,” antihero Franklin Shepard’s piano comes back on stage and he, alone, faces it. Maria Friedman’s production, now sold out at New York Theatre Workshop, concludes with a similar visual, and an idea clicked: music is the you to Franklin’s me, the thing he cares most about and what he has to lose when the people who make him sing fade away, dimming like distant stars.

In her surreal new comedy You Never Touched the Dirt, the wealthy Lis have lived detached from the land that nurtures them while also paying exorbitant prices to enjoy its unspoiled splendor in a private lakeside community somewhere outside Shanghai. Zhu Yi’s play is a bonkers, tilted, and utterly delightful eclogue; naturally, experimental mainstay Ken Rus Schmoll directs this New York premiere that bows at Clubbed Thumb’s Summerworks starting June 3. 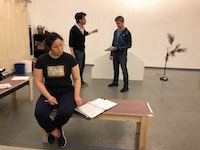 The play feels simultaneously apiece with our politically confused world and also contained totally unto itself. “I'm interested in writing plays that feel like microcosms of the ‘larger world,’” Einspanier said. “At the time of writing, I was thinking a lot about the struggle towards kindness. We talk a lot about conflict (drama!) in the theater—I wanted to explore care, and how we might embody it onstage.” 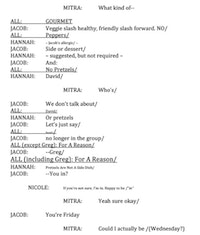 In Pursuit of the Urgently Inexplicable

Arbery—tender, clement, and an exposed nerve who shines with a quiet charisma—does not intend to be the center of attention, even as his career is exploding, and so it seems fair that he wouldn't force a principal role on anyone else, even a fictional character. 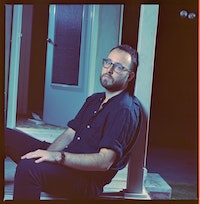 New York’s theater scene is not an ecosystem short on gay plays. However when it comes to showcasing all the colors of the LGBTQ+ rainbow, these plays predominantly come in one shade: white and gay. To fill in the gaps and build bridges to underrepresented communities, Adam Odsess-Rubin founded the National Queer Theater.

Looking Back, and Forward, as Ma-Yi Celebrates 30 Years of Innovative Work

The Obie and Lucille Lortel award-winning theater company started out in 1989 producing solely the work of Filipino American writers; while that has evolved, so has the theater’s definition of what a “Ma-Yi play” is. And that’s a strength: in a company whose ethos and blessings are fortified by its creators, each new playwright brings with them—to Ma-Yi’s numerous productions and artistic programs—their own world and experiences to expand and delight the company’s evolving landscape of thought-provoking, envelope-pushing American plays.