Case in point: David Parsons. In his 23rd year with Parsons Dance, the choreographer, performer, and producer remains credible and popular. Last month, the company wrapped up their annual New York season at the Joyce Theater, performing a retrospective of pieces spanning, in time, more than a quarter century of Parsons’ work and, in character, the stunningly original to the simply adroit.

“We can give each other love in lots of different ways,” said Julian Fleisher. “I guess.” The off-Broadway crooner, writer, producer and tight vest-wearer was an apt co-host for Act Now: A One-Time Only, Pre-Election, Anti-War Call-to-Action and Variety Show! at NYU’s Judson Church on January 18. Fleisher, typically cheeky and aloof, joined earnest dancer and performance artist Lucy “The Factress” Sexton in introducing and filling the gaps between nearly a dozen political, comical, and spiritual entertainers at the Love Everybody Movement’s most recent event. Founded in 2001 by political activist Heidi Dorow, Love Everybody produces one-off events designed, according to her blog, to “promote love, fun, and community for both participants and viewers.” In this spirit of open egalitarianism, some acts sizzled and others only simmered.

The Lady and the Light: Chunky Move’s Glow at the Kitchen

Dance often isolates in order to explore. Many choreographers take expansive themes to the stage singularly or in small combinations to more easily magnify and project them.

Tbilisi-born Nina Ananiashvili, for many years a star of Moscow’s Bolshoi Theater and the American Ballet Theatre, and a guest dancer in venerable companies worldwide, was approached in May of 2004 by Georgia’s young President, Mikheil Saakashvili, who had taken office only five months before. Saakashvili requested a meeting with the dancer, who was then at work with ABT in New York, and told her he wanted the nation’s august but faltering company restored to its former glory, and that he wanted her to make it happen.

The Joy of Intimacy: The 22nd Annual Performance Mix Festival

Intimacy is often found in the middle of the spectrum. We don’t bond as easily with the excitingly out of range or the exhausted remnants of the known as we do with what we feel is moving alongside us, at our own pace.

It's What You Say and How You Say It

"Cruelty and torture are often the product of conditioning and weird choices, if you look at it from a scientist’s point of view.”

Life is full of conflicts. Most of us take this for granted. Some of us, like Stefan Themerson, write essays about it. And others, like Dada von Bzdülöw, make dances about essays about it.

One Human Being at a Time: A Visit to Elizabeth Streb’s S.L.A.M.

Elizabeth Streb's company specializes in PopAction, a style she describes as "a mixture of slam dancing, exquisite and amazing human flight, and wild action sport."

My friend from Israel was able to give me some help with the monologue delivered in Hebrew and some background on the Israeli pop music featured in LeeSaar’s production of Geisha at PS122 last month, but I still walked away with plenty of questions about the dance. Which was fine.

Aynsley Vandenbroucke Movement Group (AVMG) formed five years ago and has danced at the Baryshnikov Arts Center, Dance Theater Workshop, and the Joyce SoHo, among others—so they are not the newest of newcomers.

DANCENOW[NYC]: STILL PLAYFUL AFTER ALL THESE YEARS

DanceNOW [NYC] “encourages artists to explore the challenge of creating work that is marked by brevity but still far-reaching in its clarity, influence and effect.” The festival is turning 15 this year, and remains a great opportunity for both audiences and artists to experience a range of new work in an invigorating and celebratory context. 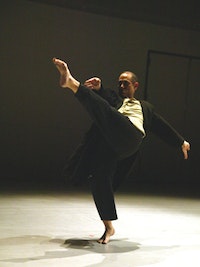 Is sneezing a dance move? I asked myself this question every few minutes on Saturday, May 17, as I stumbled around New York City’s Second Annual Dance Parade and Party, sick as a dog. As legions of smiling baton-twirlers, boom box-shakers, sequined thong-wearers, and the occasional harlequin on stilts shimmied and bounced past me on their route from 28th and Broadway to Tompkins Square Park, I had every desire to groove alongside them but found the best I could usually do was a few hearty nods before another wave of racking coughs would take over. Maybe I can make it look like I’m just really getting down, I thought.

It was promising. The roofless white box – 16 feet by 20 feet, which sat empty and brightly lit while the audience filed into the P.S.122 performance space on a Saturday night in mid-July – was suddenly engulfed in blackness, then relit with stroboscopic flashes to show three female dancers inside, variously frozen in postures of sitting, standing, and lying down. 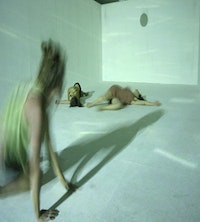 Has any dance in history been so bastardized as belly? The western translation of what is known in the Middle East as raqs sharqi (literally “Oriental dance”), belly dancing was introduced to American popular culture in several late 1800s world’s fairs, where it instantly gained celebrity–though its midriff-baring and hip-swiveling elements just as quickly made it misunderstood as a scandalous act of exhibitionism rather than a social dance performed for fun and celebration by men and women of all ages.

One of the joys of summer in the city is the traditionally indoors getting a shot at existing outdoors. Films, parties, meals—for three months each year, New Yorkers get to take them outside.

I was surprised, having seen Immediate Medium’s Chuck.Chuck.Chuck. advertised on dance websites’ calendars and having noticed a choreographer listed on their press material, that it did not contain more actual dance. 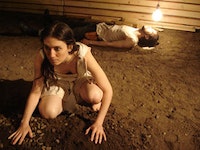 Karole Armitage, whom Vanity Fair famously dubbed “the punk ballerina” in 1986, is now in the thirty-sixth year of her plethoric career, still conscientiously smashing together the aesthetics of political and social rebellion with the techniques of classical ballet.

Mandance! HORSE’s Bones at the Joyce

It can be tempting to harbor resentment toward male choreographers and dancers, historically charged as they are with garnering more fame and money than their equally hard-working and talented female counterparts.