Everybody associated with Def Jam looked cool for a decade, then not so much after that. They also appear to have stopped doing cocaine when the ’90s rolled around, for better or for worse. 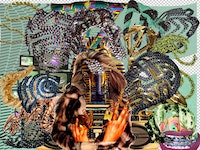