David Shankbone is a Wikipedia editor, Wikimedia Commons photographer, and an accredited reporter for Wikinews. The subjects of his interviews have ranged from the President of Israel and Nobel Peace Prize recipient Shimon Peres, to the owners of an S&M dungeon. He has also worked with a wide range of authors, photographing the like of Jonathan Safran Foer and Mary Gaitskill, and interviewing Augusten Burroughs, Edmund White, and many others. 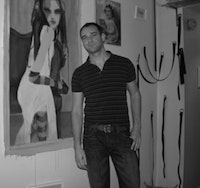 As editors, marketers, and writers look to the web for revised models of social interaction between readers and writers, how might this change the book market?

Judd begins by stripping his subject of any distinction—the square won’t be upheld for its purity of form or its democratizing evenhandedness here. He continues with a series of negations and what returns, once content is shaken off form like so much dust, is utility and difference.