an extract from Blinding: Book One

By Mircea Cărtărescu, translated from the Romanian by Sean Cotter, out now on Archipelago books

Out of that corner came Silvia, her eyes sparkling, her lips wet. Her tiny nipples peered through the flesh of her crossed arms. Her thin, naked body, her hairless pubis, and her limpid legs white as chalk were drawn against the rough background of the wall, where nocturnal insects scuttled. 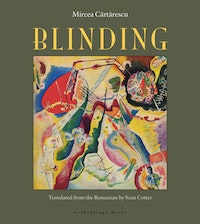