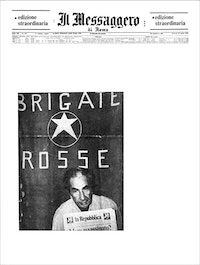 Lucie Stahl drags her viewers onto the battlefield. An ideological war is being waged, and refuge is a remote, idyllic conceit.

Braids, wisps, tufts, and beads are combed, coiled, and stacked in Salon Style, the Studio Museum in Harlem’s exhibition on African and African American hair and fingernails as sites of creative expression. 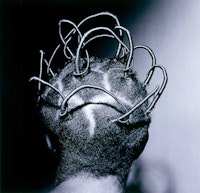 In the final scenes of François Truffaut’s The 400 Blows (1959), twelve-year-old Antoine Doinel escapes from a reform school soccer field in the middle of a game. While his fellow delinquent peers tread up and down the demarcated terrain, Doinel cuts loose.

Working at a painting conservation studio, I encountered a strange motif of jealousy and rage. The conservator recounted a trope in stabbed paintings, wherein spurned lovers and wrathful kin took their rage to the art collection, thrusting knives into Keith Harings, Lucian Freuds, Mark Rothkos, and other auction house darlings.

Oversize pixels flash on the screen, rearranging shapes to resemble faces. John Houck’s Portrait Landscape (2017) applies custom facial-recognition software to Michelangelo Antonioni’s 1966 classic Blow-Up, in which a fashion photographer examines the grainy exposures on his contact sheet only to notice he has inadvertently recorded a murder.

Under the Mexican Sky: Gabriel Figueroa—Art and Film

Diego Rivera, José Clemente Orozco, and David Alfaro Siqueiros are remembered as the giants of 20th-century Mexican murals. Their visual disciple, cinematographer Gabriel Figueroa (1907 – 97), likewise portrayed the grandeur of the Mexican landscape and its people, expanding the distinctly Mexican oeuvre beyond painting to photography, film, and television. 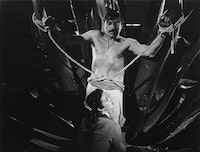 In Practice: Under Foundations

In Practice: Under Foundations surveys diverse media through the lens of foundations and other raw, basic, and structural forms. The exhibition was curated by Jess Wilcox, the 2014-15 SculptureCenter Curatorial Fellow. Wilcox commissioned 11 artists to present pieces that analyze what lies beneath a work’s exterior.